How Drones are Changing the Construction Industry

As unmanned aerial vehicles or drones are finding use in a wide variety of industries, the construction industry has also found that using drones for different tasks can improve performance in different projects. As regulations for drone use in a commercial application become more uniform, the construction industry will undoubtedly find many more uses than for camera monitoring of a site in real time.

Mounting a camera on a drone makes getting a birds-eye view possible.

Contractor Use of UAVs

Contractor use of drones can depend on whether the company has liability coverage. Under the standard and many of the non-standard liability policies at this time, automobiles, watercraft and aircraft are excluded from coverage. Since the Federal Aviation Administration defines aircraft in terms of general and recreational categories, new regulations are needed to define whether a drone is an aircraft or might be placed in a different category. Because UAVs have not yet been placed in this category but are under the auspices of FAA, the legality is still unclear on usage. However, some states already have laws concerning commercial usage of drones for clarification. Commercial use of drones requires an FAA Section 333 exemption. 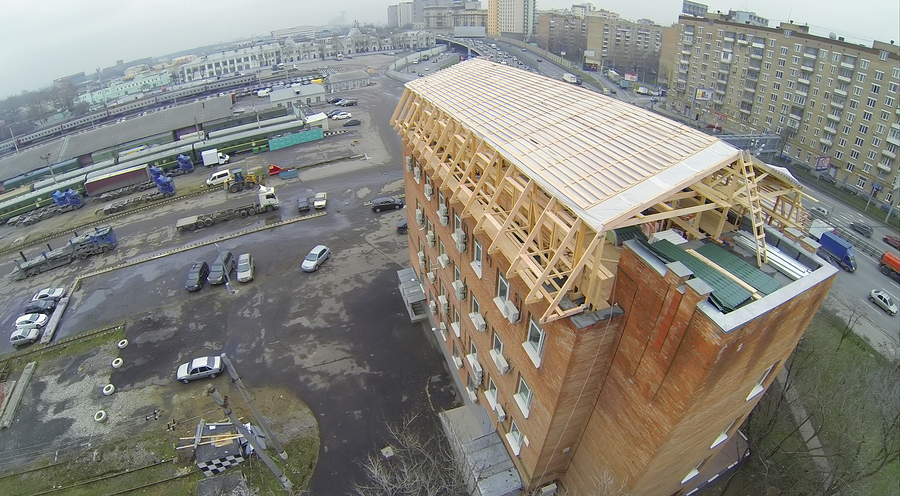 Aerial review of construction progress is easy with drones.

Construction Industry Use for UAVs

Some uses of drones in construction include taking images and overhead views to report progress in a project and monitoring of safety in the area. Because of the low-level flight achieved by drones, they can record many images that can be connected to create an overview of the project in real time. For example, a new stadium in California for the Sacramento Kings is using software and drones to monitor lags in progress with the construction. Information is gathered daily that is combined to compare with the architectural design and work plan along with information as to when sections of the design are scheduled to be finished. This helps to show areas that might be falling behind schedule in construction.

UAVs Are Not Allowed in all Areas

Although drone usage may be too expensive for smaller companies, because they are regulated by the FAA, a company has to get an exemption to operate one, and it may come with legal risks. Drones are only allowed to fly in pre-designated areas and not above certain heights, and are illegal to operate near military bases or national parks. In addition, some areas, including Washington, D.C., prohibit drone operation. Even hobby use of drones is regulated, so it may be a good idea to check on laws in your state first. As contractor jobs move into exciting new areas, taking courses at a contractor school can open up new opportunities for the future.

The cost of a drone can depend on construction and the number of legs and weight allowances, among other things. From around $100 for a small drone equipped with a camera to over $1,000 for one that includes open-source software and a computer interface through a USB port, the price depends on what uses are needed. Some are operated through the use of joysticks while other, more complex units, let you use a flying app with your smartphone that is connected to your Wi-Fi.

Attending contractor school can give an individual in construction a boost in education to move into this and other exciting fields. Begin your journey and browse courses by state to see what the future can hold for you.